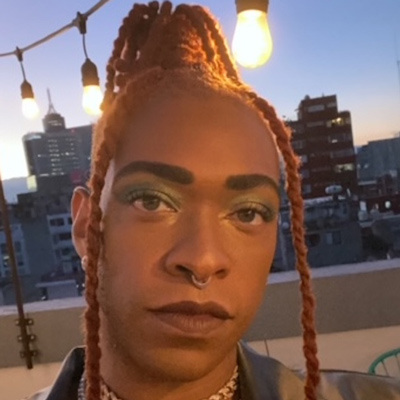 Core Member, Intersections in the Lives of the LGBTQIA+ Communities

The breadth and depth of Glover's intellectual and creative work center the experiences of Black people across the diaspora as they understand Black studies to be the critique of modernity writ large. Whether they're in the classroom arguing that Black women provide the social, economic, political and cultural foundation upon which the United States is built or delineating the knowledge derived from lived experiences of everyday Black people, Blackness remains integral to all of my scholarly and artistic explorations. For Glover, Blackness manifests as both a set of politics and embodied articulations through which Black people—wherever we might be across the world—navigate a hostile world. Further, their scholarship develops a theory called embodied knowledge—that is, the wisdom derived from harnessing lived experiences of racial, gender, sexual and classist subjugation that are transformed into strategies, tactics and tools by which Black people acquire the human and material resources necessary to survive (and thrive) in a world that remains hellbent on our annihilation.

Upon discovering their queer sexuality, Glover's Pentecostal parents forced them out of their home. At age 14, they found themselves homeless and wandering the streets of Chicago where they met three transgender women who provided them with food, shelter and an introduction to the ballroom scene. While these women had few material resources, they generously shared what they had and provided abundant emotional support through an emphasis on community. Indeed, it was their fervent support that instilled in Glover an understanding of kinship beyond hegemonic conceptions of family which ultimately saved their life. Despite the premature deaths of two of these women, their care, love and intention remain transformative and directly influence how Glover approaches research, teaching and service through their example of how to engage in labor that is undergirded by a relational approach to ethics and care. As a scholar situated in multiple disciplines, Glover encourages their students to envision interdisciplinarity and intersectionality as more than theoretical interventions; rather, they urge them to view these approaches as methods for sharpening critical thinking skills which yield complex research questions, and as strategies for conducting feminist research. Glover's approach to teaching encourages Black students to critically rethink their lived experiences as central, not peripheral, to how they relate to and move through the world.

Glover's robust record of scholarly production—including publications in prominent journals in critical theory and Black studies—reveals my commitment to the lived experiences and embodied knowledge of Black LGBTQ people across the diaspora. For example, they recently published an article in the referred journal South Atlantic Quarterly entitled “Customer Service Representatives: Sex Work Among Black Transgender Women in Chicago’s Ballroom Scene” where they draw on ethnographic data to theorize how Black transwomen perform sex work as customer service representatives who leverage their affective labor to practice self- investment. Such an epistemological shift effectively centers my interlocutors as the primary producers and benefactors of their own labor, minimizes exploitative outcomes and necessarily complicates prevalent “survival” sex narratives.